A global longitudinal study conducted by Surfshark, an Amsterdam-based cybersecurity firm revealed that Africa has had 88 internet restriction cases since 2015, the most censored region worldwide in 2020 and 2021. 38 cases happened because of protests.

Internet disruption is a weapon by the government to silence citizens’ unrest which remains worryingly high, DAILY POST reports. These cases are of national or local magnitude where the internet is slowed or completely shut down, leaving billions of people without most of their communication means. The most common reasons for censorship were political turmoil and protests.

Out of 72 internet disruption cases worldwide in the first half of 2022, social media platforms were targeted six times, which is twice in Europe and Africa, once in Asia and South America. Research co-created by Surfshark and NetBlocks shows that Asia is the most censorship-intensive region worldwide, while Africa follows.

According to the research, there were 66 internet blackouts in six countries — Internet was shut down locally in three countries and territories (India, the Jammu and Kashmir region, and Pakistan) while in Burkina Faso, Kazakhstan, and Sudan — internet connections were cut down nationwide.

“Governments in an increasing number of countries in Africa are implementing internet shutdowns as a tool to assert or maintain control over populations,” Felicia Anthonio, #KeepItOn Campaign Manager at Access Now, a global human rights organization told PRESSINFORMAT. “These unjustifiable acts of dominance violate fundamental rights and democratic freedoms,” she added. The show of digital authoritarian

In Africa, eight out of 10 persons have felt internet and social media shutdowns making Africa one of the most affected by internet censorship-intensive by the proportion of the population in the past seven years.

Alarmingly, interfering with internet access is a growing trend across the continent, and in 2021, five countries that had never previously shutdown the internet did so for the first time: Niger, Zambia, South Sudan, Burkina Faso and Eswatini.

In Nigeria, the Government banned Twitter for 222 days, which is seven months, after it clamped down on the social media site in a row over Twitter’s decision to delete a post by the President. The government restricted millions of users from accessing the means of communication and businesses.

The ban started two days after Twitter removed a post from President Muhammadu Buhari that threatened to punish secessionists, which sparked mass outrage. Nigeria’s government criticized the microblogging company for not doing enough to curb abusive posts and hate speech, and blamed it for destabilizing the country because protesters used social media as an organizing tool.

Fears of repression and curbs on free speech by Buhari’s government have grown in recent years, amid clampdowns on journalists and protest groups, including on key figures in the EndSARS protests against police brutality in October 2020.

The suspension of Twitter in the country violated the rights to freedom of association, the right to freedom of expression, amongst others, and had economic impact according to a tool developed by the monitoring organization, NetBlocks, to calculate the economic impact of internet disruptions, mobile data blackouts or app restrictions.

In Nigeria, in 2021, five States across Nigeria shut down the Internet at different points. Sources reported that the decision was “to enable relevant security agencies to carry out required activities towards addressing the security challenges in the States,” PRESSINFORMAT gathered.

The shutdown caused people to lose access to information about their loved ones and do business for weeks.

There was a disruption of internet service on multiple providers across Sudan in June, NetBlocks, a watchdog organization that monitors cybersecurity and the governance of the Internet revealed.

The incident came as protesters took to the streets to call for a civilian-led government in opposition to the military junta that took power in the October 2021 coup.

NetBlocks also confirmed other disruptions to internet service in Burkina Faso twice in 2022. The incidents came amid reports of an uprising and gunfire at military camps.

Both democratic and authoritarian regimes are imposing internet shutdowns during important national events such as elections and protests.

In 2021, Access Now informed PRESSINFORMAT that authorities in 12 countries in Africa, including Burkina Faso, Chad, Eswatini, Niger, Sudan, Nigeria, Republic of the Congo, Uganda, and others hit the kill switch, disrupting or entirely cutting connectivity during protests.

This empowered governments to thwart and quell protests, while hiding human rights violations that are commonly linked to security forces’ crackdown on protesters, particularly in countries that have authoritarian regimes or weak democracies.

“Additionally, governments in Uganda, Zambia, Niger, and the Republic of the Congo shutdown the internet during elections, disconnecting millions of people from the ability to access information on candidates, locate polling booths, or share their views online — denying them their rights to fully participate in the democratic process. Genuine democracy and internet shutdowns simply cannot exist in unison,” Access Now revealed. 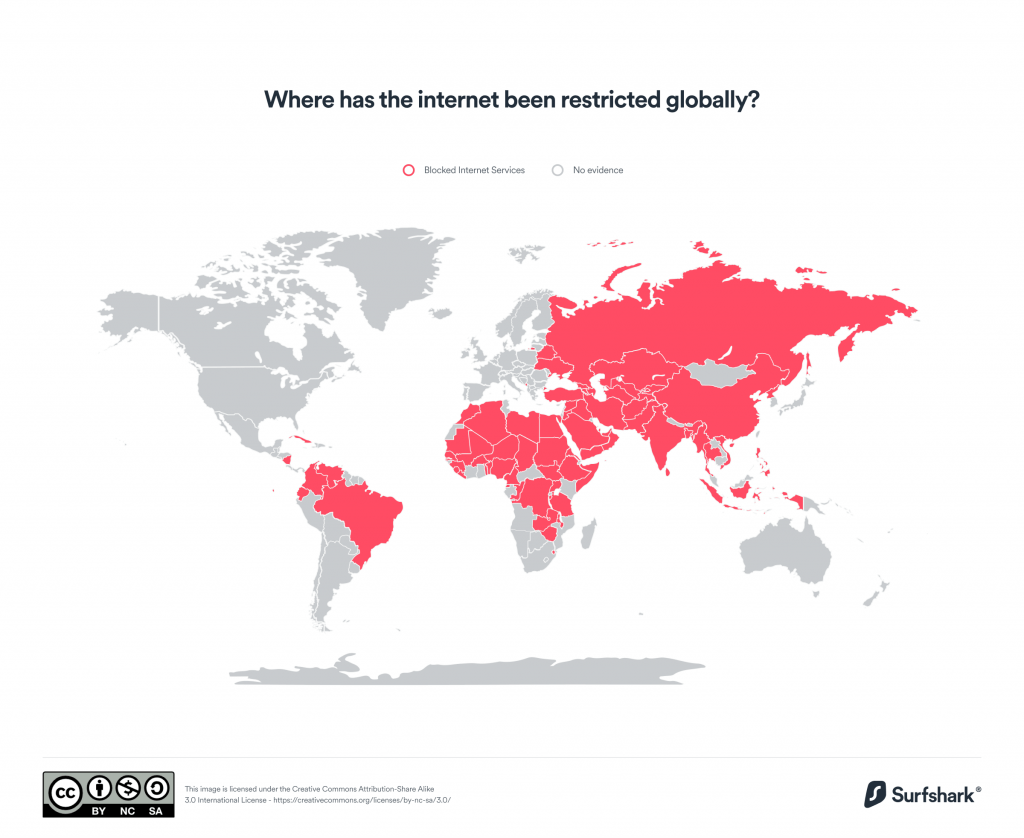 In the documents Paradigm Initiative (PIN) shared with PRESSINFORMAT on the state of digital rights and inclusion in Africa that feature 22 counties — in its conclusion, the manipulation of information and public opinion infringes on the rights of citizens and must stop.

Governments must set policies that keep the Internet open and safe for all and work with relevant stakeholders to eliminate online violence, bullying, hate speech and misinformation, said Paradigm Initiative.

“The manipulation of information and public opinion infringes on the rights of citizens and must stop. There is also a need for thorough fact-checking of information online through set guidelines and tools.

“Nonetheless, this should not serve as an opportunity for governments to survey their citizens. The digital rights of every citizen must be respected. Private institutions are also implored to demonstrate their commitment to digital policy development and work closely toward the shared objective of protecting citizens, businesses, and organizations in the digital era,” it added.

Nigeria’s Minister of Information and Culture, Lai Mohammed announced the banning of Twitter in 2021. The National Broadcasting Commission (NBC) followed suit, ordering all broadcasting stations in Nigeria to suspend the use of the popular microblogging platform.

This order prevents people from getting information and hinder journalists from working, as many media organizations can be accessed online.

“Across the continent, we have seen where the internet is blocked and disruption of social media platforms, communication platforms. This hinders journalists’ ability to do their job fundamentally because a lot of media houses these days, of course, are online,” Jonathan Rozen, a Senior Africa Researcher for Committee to Protect Journalists (CPJ) told PRESSINFORMAT. He said internet disruption denied journalists and people from accessing information, especially during major crises.

“Press Freedom is absolutely integral for democracy everywhere. So, journalists censored in whatever way, whether jailed or killed or attacked or having their reporting electronically censored hinders the society to be informed and allow them to make decisions for themselves and their politics and that hinders democracy badly.

“In addition, when the internet is disrupted, journalists are unable to use encrypted messaging services that rely on the internet. They are not only denied access to publish or broadcast to inform the public, they are also denied the ability to secure communication with sources. Their safety and ability to deliver the news is denied when internet services are disrupted,” Rozen said. The world is watching

Rozen said CPJ is communicating to the government in various ways to ensure that internet services are maintained.

The #KeepItOn coalition said it has been documenting internet shutdowns around the world since 2016. Across Africa, the group disclosed that it recorded 118 shutdowns between 2016 and 2021 in 36 countries, the majority of which are relating to elections, protests, and political instability.

“The government of Nigeria blatantly disrupted access to the internet — and to freedom of expression and assembly online — when it actively blocked Twitter for seven months in 2021. Civil society fought back, and challenged the ban before the Economic Community of West African States Court of Justice (ECOWAS Court).

“This year, in a clear message to all governments attempting to control their populations, the ECOWAS Court declared that the blocking of the platform was illegal, requiring the government to take measures to ensure similar acts of censorship are never allowed to take place again.

“While authorities may believe they are above the law, above our human rights, and above accountability, the eyes of the world are watching, and we — the #KeepItOn coalition and civil society from across the globe — are holding their authoritarian tactics up to the light,” Anthonio stated.