APC: Give us Muslim, Christian ticket or forget our votes – Northern Christian clerics

The groups, which met on Tuesday to review the participation of Christians in the APC presidential campaign council, warned that it will withdraw the support of millions of its followers across the country should the ruling party proceed with Kassim Shettima as Bola Tinubu’s running mate.

The Christian leaders and heads of the APC coalition made their displeasure known in a communique issued at the end of the meeting in Abuja.

Lamenting the neglect of Christians, they said fielding the same faith ticket in an election is, by all standards, a national threat and one that must not be allowed to stand.

“We understand that the argument against substituting the Muslim Vice Presidential candidate of the APC with a Northern Christian is based on its proponents because it is no longer possible. Still, we beg to differ by stating categorically that it is possible, adding that the APC can make the change if they have the interest of Nigeria at heart.

“To address this, a few steps must be taken, which in isolation or collectively will bring about the APC not fielding a Muslim-Muslim ticket but a Muslim-Christian ticket which, of course, should be the standard.

“The leadership of the APC should ensure the Vice Presidential candidate nominee resigns with immediate effect. As clearly stated in the new electoral amendment law, he should be made to officially write to INEC to notify them of his withdrawal from the race. 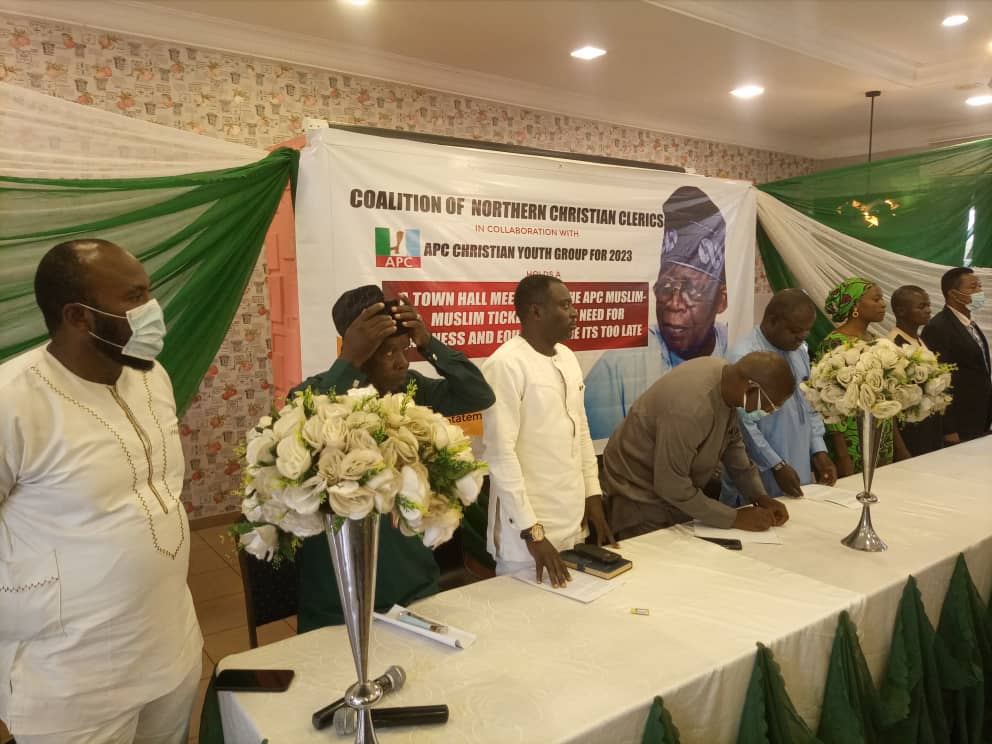 “The new electoral Act states that a candidate elected in the primary election of a party platform as its flag bearer for any position can resign his interest and withdraw from the contest by notifying INEC no later than 90 days before the election. If this window period is permissible for elected party candidates, how much more its surrogates

“If the APC can find a competent northern Christian to lead its 2023 general election campaign, finding a replacement for Kashim Shetima should not be a problem. APC should look through the many capable northern Christian members of the party who have contributed to its success since its formation and since its takeover of Nigeria’s national leadership.

“Neglecting these grievances around the party’s Muslim-Muslim ticket for the 2023 election could breed further resentment, costing the party its expected victory in the forthcoming election.

“There is already disaffection over APC’s Muslim-Muslim ticket not only among Northern Christians but among the generality of the Christian population of the country. Undoubtedly, the APC has tried its best to ensure effective leadership of the country by making efforts toward improving Nigeria. But it must be noted that the continuation of the APC in Nigeria’s national leadership in 2023 will ensure the sustainability of the party’s efforts towards improving Nigeria.”