Nkwagu also faulted the continued detention of the former member of the House of Representatives, Linus Okorie in the Abakaliki correctional Centre.

Okorie, who is the Ebonyi South Senatorial Candidate of Labour Party, was arraigned in a Magistrate Court sitting in Abakaliki, for five count charges bordering on alleged murder, conspiracy, felony, among other crimes.

Nkwagu described the incident as wickedness and injurious to both people of the state and the opposition party.

According to him: “It is disheartening and wrong for a suspected armed agent of Ebonyi State Government to deny the opposition party from reaching out its supporters across the state,” he stated. 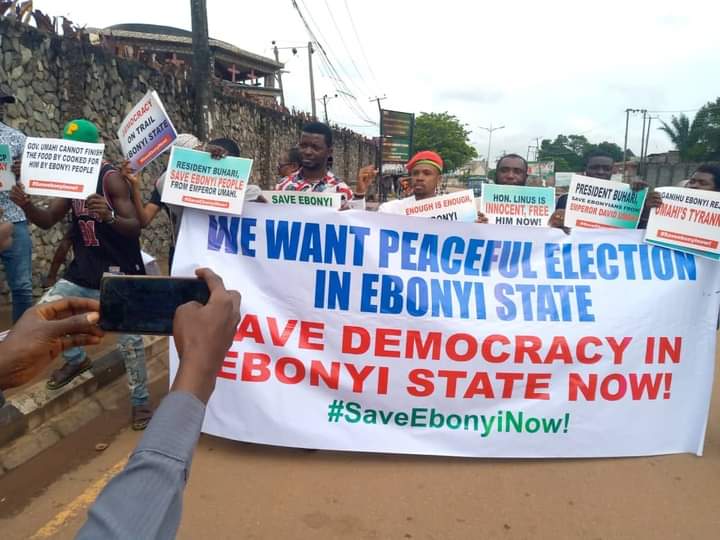 In a related development, a coalition of Civil Society Organisations and concerned Nigerian citizens in Ebonyi State on Friday protested against the alleged continued harassment, intimidation and attacks of opposition parties by the agents of the state government.

The groups, who demanded the immediate removal of the Commissioner of Police, Aliyu Garba from Ebonyi, said the state is threatened by insecurity and killings.

The leaders of the protesters, Dr. Laz Ude Eze, representing Oganihu Ebonyi Movement and Engr. Chinedum Elekwachi, CUPP, said: “The State has undoubtedly become a war zone orchestrated by State agents under the directive of the governor. There has been consistent and shameful disregard to the rule of law, intimidation, abduction and torture of innocent citizens, as well as oppression of the opposition.

“We rise to alert President Muhammadu Buhari, Nigerians and the whole world in particular on the disturbing issues in our dear state, and call for the rescue of our people.

“Going down memory lane, Governor Umahi who was elected the third civilian Governor of the state in 2015 have become the direct opposite of a civilian leader, and has therefore turned himself into a demi-god, a maximum dictator of sort and has consistently exhibited acts that runs affront to the letters of 1999 constitution (as amended) which he had swore an oath to protect.”