Fans are hailing Lindsay Lohan’s new A-list stylist and calling it the “Law Roach Effect” now that the actress has finally returned to the public eye.

According to Deadline, Lindsay Lohan has re-entered the acting industry after signing a contract in March 2022 to star in three upcoming films of Netflix. This news marks her return to the industry. The one with the working title “Falling for Christmas” is anticipated to be published in the latter half of 2022. In this movie, Lindsay Lohan plays an heiress who gets engaged and is lavishly pampered by her suitors.

In addition to appearing in an upcoming Netflix film, she is now recording a version of “Jingle Bell Rock” in a recording studio.

After that, the actress went out onto the streets of New York City to continue being popped, which is exactly where she should be because it is her natural habitat. The lady who helped with rushing throughout the early stages of the Y2Y style and the Indie Sleaze style has finally made a reappearance, and she did it in a daring manner.

But if there was one thing that stood out about her appearance, it was the way that Lindsay Lohan’s stylist, Law Roach, dressed her.

What is the Law Roach Effect?
The phenomenon known as “the Law Roach Effect” occurs when a celebrity makes the decision to work with the most recent recipient of the CFDA Stylist Award, Law Roach, and their style and overall appearance improve as a result.

After making an appearance on ABC’s “Good Morning America” on November 8, 2022, to promote her new film “Falling for Christmas,” which will be released on Netflix on Thursday, Lindsey Lohan was spotted out and about in New York City shortly after her appearance.

The actress was spotted leaving her home in a suit of Akris’ autumn 2022 ready-to-wear line, which was brilliantly coloured. The jacket, turtleneck, and boot-cut pants all had a pattern that was geometric and featured the colours green, yellow, red, and orange. The look was finished off by Lohan by accessorising with gold hoops, a crossbody bag, and metallic red Giuseppe Zanotti platform heels. Lohan’s signature red hair was styled into a tight bun.

According to Lohan, the CFDA Stylist Award winner Law Roach was the one who was responsible for creating the look, which was both on-trend and unforgettable. It would appear that Lohan has retained the services of a fashion stylist in order to aid her with selecting outfits for her publicity tour for her next holiday film. Akris acknowledged the stylist on each of their own Instagram pages as well.

In addition, the public has shown approval of the outfit selection, as seen by the following tweet from a devoted fan: “So Lindsay has a new holiday romance movie coming out, is on the cover of Cosmo, and is being dressed by Law Roach?”

Law Roach is Lindsey Lohan’s New Stylist
One user commented in response to a tweet that claimed Lohan has the “Law Roach Effect,” saying, “I have no idea what the Law Roach Effect means, but it has to signify something about making a return.”

On the other hand, there is widespread consensus that Lindsay Lohan has made a comeback, and the “Law Roach Effect” is largely responsible for this development.

Lindsey Lohan has a new stylist, and his name is Law Roach.

A well-known celebrity fashion stylist, Law Roach has also been on the reality competition show “Legendary” as a panellist for the game’s several challenges.

He is fond of referring to himself as a “celebrity super stylist” and a “image architect.”

Roach has a long history of working with famous people; Lohan is not the only celebrity he has worked with. Prior to that, he was in charge of Zendaya’s nude-illusion Balmain ensemble and Bella Hadis’ retro-vintage archival forms look for the 2022 Cannes Film Festival. Both looks were for the actress Bella Hadis.

One of his most famous appearances was at the 2019 Met Gala, where he played the role of Roach, the “Fairy God Brother” to Zendaya’s Cinderella. With the wave of his wand, he illuminated her gown, making it one of his most memorable moments. Before this, he was the one who designed the entirety of Celine Dion’s dress for Paris Fashion Week in 2016.

However, it appears as though all of this is in the past because Lohan is using the Law Roach Effect for her return. 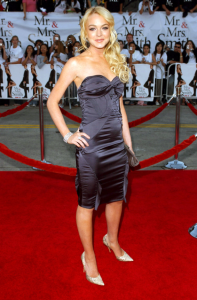 Lindsay during at the premiere of that Brad n Ange film, Mr & Mrs Smith in 2005

Lindsey Lohan’s Journey With Stylists
Actress Lindsey Lohan kicks off her fashion flashback with a blue Nicole Miller gown that she wore to the premiere of “The Parent Trap” in 1988. At the time, she was 11 years old when she acted in her first feature film. She stated that the actress’ mother still had this garment in her closet.

Since she began playing one of the pink-clad Plastics in the film “Mean Girls,” which was released in 2004, she has worked with a number of different stylists.

Although the addition of personal stylist Rachel Zoe to the LA celebs surely increased Lindsay’s fashion supply, at the 2005 MTV Movie Awards, she chose a gorgeous, flowy gown that displayed her lean frame. This was the same year that Rachel Zoe joined the LA celebs.

Zoe and Lindsay were making appearances on best-dressed lists on both the American and the British side of the Atlantic, just like Nicole Richie and Mischa Barton had done previously. At the premiere of “Mr. & Mrs. Smith” in 2005, she took a picture of her wearing a dress by Gucci that fit perfectly and a pair of heels by Chloe.

In terms of more recent experiences with fashion, Lohan recalled attending the Chanel show in the fall of 2010 with the late fashion designer Karl Lagerfeld by her side. Lohan made this recollection in reference to contemporary fashion.

Some FAQs
What is the Law Roach effect?
It occurs when a celebrity hires the most recent winner of the CFDA Stylist Award, and as a result, the celebrity’s whole appearance and sense of style are elevated to a higher level.

Is Law Roach, Lindsey Lohan’s new stylist?
The renowned fashion stylist Roach and the famous actress Lindsay have reconciled their differences, and Lindsay is now working with Roach to style herself.

How old is Lindsey Lohan?
The age of 36 is a milestone that Lindsey Lohan has now attained. She was born on July 2nd, 1986 in New York City, which is located in the United States.