He governed with sincerity and passion for the people - Goodluck Jonathan pays tribute to his former boss, Umar Musa Yar'Adua on his 12th death anniversary

Gbajabiamila’s Former Aide, Odofin Reacts To Petition Calling For His Disqualification From House Of Reps Race

Some Kaduna Aspirants Who Lost Primaries Use Vigilantes, Hunters To Recover Money From Delegates — Shehu Sani

Three Other Governorship Aspirants In Enugu Step Down After Ex-Deputy Senate President, Ekweremadu

How Nigerian Police, Detained Criminals Work Together To Cause Troubles, Blame ESN In South-East – IPOB

In a statement released today, Jonathan stated that his former boss governed Nigeria with sincerity and passion for the people. His tribute reads;

”Twelve years ago, our nation lost a patriot, a selfless leader and a peacemaker who governed with sincerity and passion for the people. President Umaru Musa Yar’ Adua is no longer with us today, but his strides in public life continue to testify for him and keep his memory alive.

Like a good athlete, he ran with passion, kept the faith and finished the race. Today we can look back and say, as President he won laurels for us in terms of peace and other worthy causes he successfully pursued.

He was a soldier of truth, committed to justice, equity and other democratic virtues. He was a servant leader and a good man; the type that is hard to find.

He was my boss.

President Yar’Adua, we remember you today and will continue to remember the good works that you did in our nation. Yours is a story of patriotism, a life well-lived in service to the people and humanity. 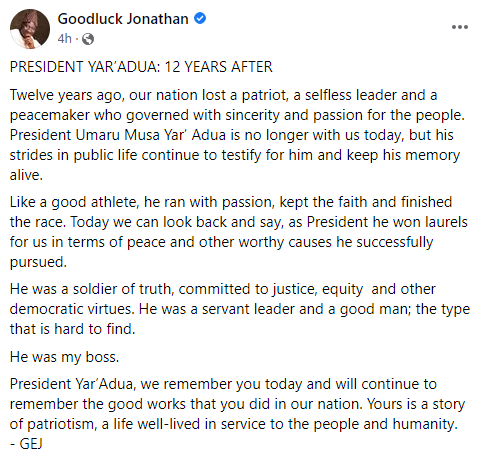 Someone is After Me!!! Tonto Dikeh’s Ex Prince Kpokpogri Cries out as FCDA Demolishes his Mansion in Abuja (WATCH VIDEO)