If you are interested in GK Barry’s partner and have listened to her podcast with The Bellas, then you should be aware that she possesses a toxic trait that drives her to fall for the rude guy. This information can be found in the podcast.

That really piques your interest, doesn’t it? It’s very uncommon for women to gravitate toward males who enjoy driving a wedge between them, so Barry, we know your pain. Barry also stated that she has a thing for toxic males and that this is one of her weaknesses. She had a fascinating story to tell about a former relationship, which she openly discussed on the show and which will be discussed in more depth below. The narrative will be addressed in more detail below.

Since she first enrolled at Nottingham Trent University as a young and naive film student three years ago, Grace Keeling, better known by her stage moniker GK Barry, has come a long way since she first began studying cinema there.

The social media sensation rose to prominence after she created an account on TikTok and began posting mini-vlogs and short stories on the platform that detailed her day-to-day activities during the Covid-19 lockdown.

She wanted to conceal her identity and keep a low profile, so she named her account after the surname of her best friend. Despite her best efforts, Grace rapidly amassed a sizeable number of followers despite this ruse.

By August 2020, just five months after she first opened her account, she already had a following of one hundred thousand people. Over the course of more than a year of regularly making people laugh in the TikTok community, she had amassed more than one million followers.

Grace has also tried her hand in the world of podcasting by launching her very own show, titled The Saving Grace Podcast. For the purposes of the podcast, a wide range of influential people and celebrities are solicited for participation in discussions regarding topical issues, popular culture, and embarrassing experiences from their pasts. Similar to how she has performed on TikTok, the podcast has already reached the top of multiple charts, and it will almost certainly continue to do so as her career progresses.

GK Barry Boyfriend- A Peek At Her Dating History
The details of GK Barry’s present dating life have been kept a secret. As a result, it is not obvious whether she is now single or whether she is focusing on both her business and her life as a single person. On the other hand, in 2021, she did a podcast in which she and her ex-boyfriend talked about the bizarre event.

She was previously in a relationship with a man who had a criminal record that included 21 assaults. The fact that he had served time in jail is what initially drew Barry’s attention to him, despite the fact that this may sound intimidating. In contrast, after the event, when he attempted to run her over, Barry was instantly dragged away from him as she exclaimed, “I didn’t sign up for that.”

Let’s take a closer look at what led to her breakup with her boyfriend. She said that she had already ended her relationship with him before she started her first year of college. But he continued to send her unsolicited messages, and Barry appeared to love the attention. She openly admitted that she did appreciate the attention, saying, “I entertained it a bit, can’t lie.”

When she went out with her companions for the evening, she made the conscious decision to silence her phone. On the other hand, the guy was so excited to meet her that he drove all the way from Cambridge to Nottingham, which is a distance of two hours, just so he could see her.

You must believe that this is the end of everything, but you should hold on—it gets even worse! Barry arrived back to her house at four in the morning with two other men surrounding her, which prompted her to say something to the effect of “I had two men on my arm; not like that they lived with me, but it did look dubious.”

Surprise! Surprise! When Barry finally makes it home, she walks in to find him already there waiting for her. She stated that “he sees me crossing the road, foot on the gas, and I’m shivering.” She went on to say that “the person I was with, whom he thought I was cheating on him with, flees into the accomodation and leaves me.”

It is the 13th of August on her birthday, which means that she will turn 22 years old in May of 2022. In the underworld, she goes by her full name, which is Grace Keeling. She is a well-known Instagram figure who rose to recognition as a result of the images, captioned Reels, and motivational words that she uploaded to her account.

Since she first arrived at Nottingham Trent University as a young and eager film student three years ago, Grace Keeling, better known by her stage name GK Barry, has come a long way since she began her studies in the film industry there. 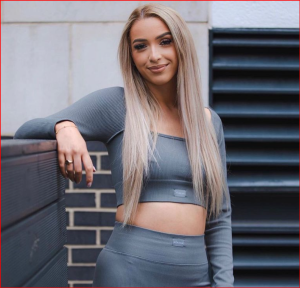 Grace Barry, a.k.a. GK Barry: Who Is She?
TikTok has become a worldwide phenomenon, and as a consequence, people are anxious to find out more about Grace Barry, the most recent person to become famous through the platform. Take a look at the article with me if you’re interested in learning more about her private life.

Her experience in social media has played a role in her decision to earn a master’s degree in digital marketing; this path will not only help her grow her personal accounts, but it will also allow her to broaden her understanding of the industry and provide her with the tools she needs to begin managing different social media accounts in the future. Her work in social media has influenced her decision to pursue a master’s degree in digital marketing.

She is considering a career in television production in the future; during the course of her previous work experience, she discovered that the most enjoyable components of her job were being on set and collaborating with a team of other people.

After gaining experience in other units and figuring out which areas of the industry she enjoys the most, her ultimate goal is to become a television presenter for a network such as BBC Three or ITV. This will be her next step.

She attracts a considerable number of followers and is rather well-known among users of the platform. She launched her professional career as a well-known figure on social media, and she currently has more than 120.000 people following her on the reputable platform Instagram.

Her meteoric rise to stardom has been unstoppable since since her Instagram account initially came to widespread attention.

She remembers being very afraid prior to her first day of college, in addition to being extremely shy! As soon as she arrived in Nottingham, she had a dramatic change and became an incredibly extroverted person. Because of what she went through in college, she now has a much higher opinion of herself.

She started using TikTok around the time that it was being shut down for the first time, and by August of the same year, she had accumulated more than 100,000 followers. While she had only been using the app for a little over a year, she had already reached the one million user milestone.

Kate Elisabeth Net Worth And Income, How Rich Is The Youtuber?